What Is Craniosacral Therapy?

CranioSacral Therapy (CST) is a gentle but powerful alternative healing system affecting the deep and protective membranous tissues your central nervous system. Directly relating to the delicate cranial bones, the spinal system or anywhere in the body that may have restricted range of motion to release pain and discomfort, thus bringing the body into homeostasis. 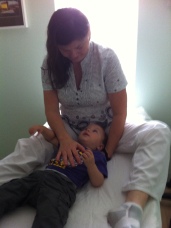 CranioSacral for Pediatrics CranioSacral for Pediatrics CranioSacral for Pediatrics CranioSacral for Pediatrics Our bodies function at a deep physiological level. Our tissues subtly “breathe” with the motion that produces a rhythmic pulse which can be palpated by sensitive hands. The presence of these subtle rhythms were discovered by osteopath Dr William Sutherland over 100 years ago, while examining the cranial bones in medical school. During this time, Dr Sutherland discovered that the motion of cranial bones are closely connected to subtle movements that involve a network of interrelated tissues and fluids at the core of the body; including the brain, central nervous system and the sacrum. A trained practitioner has developed the skill to work with in this subtle system to unlock trapped emotions, reduce pain and dysfunction of the body as a whole.
Expression of the Body Systems
Working within this subtle rhythm is regarded as an expression of health, at a cellular level, allowing the body the ability to express itself in full range of motion in all areas… emotionally, neurologically and physically. Allowing the of cells and tissues of each system to express their primary natural function, determining our state of health – when these rhythms are expressed in fullness and balance, health and well-being naturally follow.
Stress & Trauma
During the course of our lives our bodies become patterned, shaped and conditioned according to how we’re able to deal with any stresses or traumas. If stresses or traumas are overwhelming, they become locked in the body as cellular cysts – until such a time as we are able to access resources that allow them to be processed and released. A build up of these cellular cysts effect the natural rhythmical movements of the body reduce range of motion, sometimes produce scaring, physical injuries, emotional and psychological stresses and toxicity. Due to an accumulation of these stresses, tissues can become imprinted with the memory of unresolved experiences and so act like video tape which may keep replaying whenever stimulated. CST aids in the restoration of proper function and rhythm to the body as a whole at a cellular level.
A gentle facilitation
The emphasis on Craniosacral Therapy is to help resolve the trapped forces that underlie and govern patterns of disease and fragmentation in both body and mind. This involves the practitioner “listening through the hands” to the body’s subtle rhythms and any patterns of inertia or congestion. Through the development of subtle palpatory skills the practitioner can read the story of the body, identify places where issues are held and then follow the natural priorities for healing as directed by the client’s own physiology.
The intention of treatment is to facilitate the expression of the body’s own self-healing and self-regulating capabilities. This is done in a non-invasive way as the practitioner subtly and gently encourages the conditions that allow for the reemergence of primary respiratory motion. Furthermore, the practitioner’s deep and clear quality of presence can become a reflective mirror for the patient and an invaluable cue for their potential for change.
A holistic approach
CranioSacral Therapy takes a whole-person approach to healing and the inter-connections of mind, body and spirit are deeply acknowledged. It is an effective form of treatment for a wide range of illnesses helping to create the optimal conditions for health, encouraging vitality and facilitating a sense of well-being. It is suitable for people of all ages including babies, children and the elderly, and can be effective in acute or chronic cases.

CranioSacral Therapy (CST) A calming, gentle, effective subtle bodywork that uses light touch to enhance the body’s natural healing processes and relieve chronic pain patterns and dysfunction. It works with the body instead of forcefully imposing changes upon it bringing it naturally into homeostasis. This technique is increasingly used as a preventive health measure because of its ability to bolster resistance to disease and sustain overall good health as well as increase energy, enhance sleep patterns and decrease incidences of sickness.

How Does CranioSacral Therapy Work?

CranioSacral Therapy helps the body’s natural healing mechanisms dissipate the negative effects of stress on the central nervous system.
Relieving pain, and restoring ones ability to recover from injury at a more accelerated pace.
This is accomplished through the CranioSacral system, which maintains the environment in which the central nervous system functions. This system consists of the membranes and cerebrospinal fluid that surround and protect the brain and spinal cord. It extends from the bones of the skull, face and mouth (which make up the cranium) down to the tailbone area (or sacrum). The role of this system in the development and performance of the brain and spinal cord is so vital that an imbalance or dysfunction in it can cause sensory, motor and/or neurological disabilities.
Like the pulse of the cardiovascular system, the CranioSacral system has a rhythm that can be felt throughout the body. Using a touch no heavier than the weight of a nickel, skilled practitioners can monitor this rhythm at key body points to pinpoint the source of an obstruction or stress. Once a source has been determined, they can assist the natural movement of the fluid and related soft tissue to help the body self-correct. This simple action is often all it takes to remove a restriction. Rather than deciding how these changes should be made, the therapist follows cues from the body on how to proceed. This gentle approach is extremely safe and effective. Other times, CST may be combined with other complementary therapies to help restore the body to its optimum functioning level.

What to Expect… How a session is performed.

A CranioSacral Therapy session usually takes place in a quiet, private setting wearing loose, comfortable clothing. The session is performed with the client reclining, on a massage table or sitting if needed. Hand positions work through “stations” at various times throughout the session at the client’s head, middle torso or feet. Working with the cranial bones, spinal fluid and sacrum.

What you may experience during a session.

Experiences during a CST session are as individual as the clients and practitioners themselves. They also may differ from session to session. At times, a client may deeply relax or even fall asleep; at other times, he or she may talk a great deal, recalling hidden memories or expressing emotions. Some will remain still during the entire session, hardly noticing the practitioner’s evaluation and treatment, while others will experience sensations within the body as the evaluation process is carried out.
At various times throughout the session, the practitioner will support a client’s limbs and spine while facilitating release of accumulated tension. This process is called energy cyst release or tissue release. During this release, the client might recall circumstances surrounding a past shock, trauma or injury. Releasing and re-experiencing past hurts assists the body in reversing dysfunction and restoring the previous level of mobility. This entire process has been named Somato Emotional Release®.

What you may experience following a session.
This relaxed state may cause some to sleep for many hours after a session. Others may experience an increase in energy. Reduction of pain or an increase in function may occur immediately after the session, or it may develop gradually over the next few days.
Since CST helps the body resume its natural healing processes, it isn’t unusual for improvement to continue weeks after the session. For some there may be a reorganization phase as the body adapts to the release of previously held patterns.
By complementing the body’s natural healing processes, CST is increasingly used as a preventive health measure for its ability to bolster resistance to disease, and is effective for a wide range of medical problems associated with pain and dysfunction, including:

The few contradictions to CranioSacral Therapy are: acute aneurysm, intracranial hemorrhage, and other conditions where altering intracranial fluid pressure is not recommended. Any one with these conditions must inquire with their Medical Doctor prior to receiving treatment.
CST was pioneered and developed by osteopathic physician John E. Upledger following extensive scientific studies from 1975 to 1983 at Michigan State University, where he served as a clinical researcher and Professor of Biomechanics. CST is a gentle, hands-on method of evaluating and enhancing the functioning of a physiological body system called the CranioSacral system – comprised of the membranes and cerebrospinal fluid that surround and protect the brain and spinal cord. Using a soft touch generally no greater than 5 grams, or about the weight of a nickel, practitioners release restrictions in the CranioSacral system to improve the functioning of the central nervous system.
For nearly 30 years, it has been shown to be effective for a wide range of medical problems associated with pain and loss of function. CST is useful both as a primary therapeutic method and in combination with other traditional or complementary techniques.